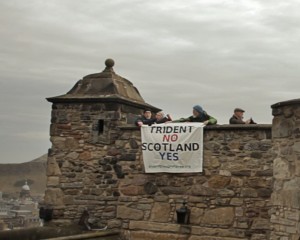 The disarmament campaign group Trident Ploughshares took their hopes for an independent Scotland free of nuclear weapons to a crowded Edinburgh Castle on St Andrews Day, dropping a banner with the message SCOTLAND YES, TRIDENT NO from the highest parapet.

With hundreds of visitors milling around  the demonstrators displayed a placard outside the War Memorial and dropped a banner reading SCOTLAND YES TRIDENT NO over the parapet near the world famous 15th Century canon Mon’s Meg, before standing in a line, each holding a large letter which on one side read SCOTLAND YES and on the other TRIDENT NO.  Many visitors, entertained and intrigued by the demonstration, gathered round and took photos and videos. There was no doubt that the event enhanced the visitors’ whole experience. 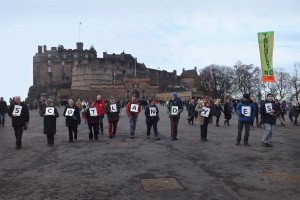 The St Andrews Day demonstration was a response to the launch of the Scottish government’s white paper on independence. One of the activists said “We wanted to send a message that a vote for independence is a vote against nuclear weapons. We support the Scottish government’s call for getting rid of Trident and a constitutional ban on nuclear weapons.” 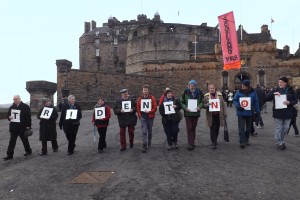 Speaking on behalf of the group David Mackenzie said “People had come to the castle to get a taste of a particular part of Scotland’s history and we thought it made sense to highlight our hopes for the future. Would it not be great if alongside Mons Meg, the biggest gun of its time, on the parapet of the castle there will be in the future the empty hulk of a Trident missile – another bizarre museum piece for future generations to wonder at?”

“Next year we Scots will vote in the referendum on independence and this is the very best chance we can see for ridding our country of weapons of mass destruction. Such a move would also most likely mean that the UK as a whole would have to abandon nuclear weapons and this would be a huge spur to worldwide disarmament. Of course, all we have at present are promises and we will do our best to make sure that those in government in a new Scotland will abide by them. 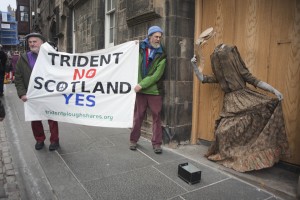 The SNP has assured us that its policy will mean that NATO warships carrying nuclear weapons will not call at Faslane. We want Scotland to go further and keep out of the nuclear armed NATO. ”

Joy Mitchell, 80, said “Many of us here today are grandparents. And we want our grandchildren to grow up in a place free from all taint of these loathsome weapons which are designed to commit mass murder.”

After the peaceful  demonstration the activists complied with the Castle security people’s request to leave and walked down the esplanade displaying our placards and singing “Ban the Bomb, Bin the Bomb”