Skip to primary content
Peace & Justice is supporting a protest tomorrow in Edinburgh at the Russian Consulate on Melville St (9am) and US Consulate on Regent Terrace (10:15am) in response to the announcements by the US and Russia of their intentions to withdraw from the Interrmediate Range Nuclear Forces Treaty (the INF). We will be joining other Scotland Internaional Campaign to Abolish Nuclear Weapons (ICAN) partners in urging the parties to resume constructive dialogue and stay in the INF, and calling for them to join the UN Nuclear Ban Treaty (TPNW). Share the Event on Facebook here. 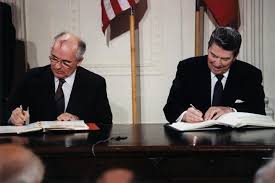 The INF was signed by Reagan and Gorbachev after huge and widespread public pressure in the 80s. The INF has reduced the risk of nuclear war in Europe since it was agreed in 1987. All of us who campaigned for the US and Russia to remove Cruise and Pershing and Russian SS missiles from central Europe breathed a huge sigh of relief when these dangerous weapons were dismantled and destroyed. The demise of this important treaty will be a huge setback and will greatly increase the risk of nuclear war, in particular in Europe.

As an ICAN partner the Peace & Justice Centre supports the TPNW.  But that treaty will not come into force until it is ratified by 50 countries, and then it will not, at first at least, apply to the countries that do not sign it. That includes all the current nuclear armed states. And may not happen for two more years.

The US 2018 National Defense Authorization Act (NDAA) authorized funds for the Defense Department to develop a  ground-launched cruise missile that, if tested, would violate the treaty.  In addition, the US is actively developing a low-yield Submarine Launched Ballistic Missile, the W-76-2  that is expected to be ready to roll out in October. While this warhead would be mounted on a long range ballistic missile it would not violate the INF Treaty, but it is part of the US response to the Russian and Chinese developments of intermediate nuclear forces. This is particularly relevant to the UK as these warheads could be deployed on UK Trident submarine.
According to Hans Kristensen, Director of the nuclear information project at the Federation of American Scientists, this is a 5 – 7 KT warhead that will be mounted on the Trident D-5 missiles, that is the same missile as the current W-76 -1 warhead with its 100KT yield. The Hiroshima bomb had a yield of approximately 15 KT. The danger is that, were the US to launch the low yield missile Russia would not be able to determine whether it was low yield or high yield and would need to decide within minutes whether to launch their own high yield nukes immediately. Possession of such a low yield weapon will give the US more options for use of nuclear weapons in situations in which it would not consider the use of its strategic weapons.
Furthermore the US is adding a remotely piloted guidance system to the B61 gravity bombs that are still deployed in Europe, again increasing its mission capabilities and posing a greater threat to Russia.
A Chink in the Armour of the Nuclear Weapons Establishment: A No First Use policy
This week US Presidential candidate Elizabeth Warren introduced a No First Use bill through the Defense Appropriations Committee in the Senate. Obama had wanted to do so but was talked out of it by the National Security establishment. This follows a statement she made in October that she will support “three core nuclear-security principles:” No First Use, no new nuclear weapons and more international arms control, not less. By introducing this legislation she is demonstrating her intention to follow through on her rhetoric. This means that halting the US and adversaries’ modernisation programmes will be part of the debate during the Presidential campaign, and this has not happened for a long time. With this it is now possible to imagine her or other Progressive candidates outrightly supporting the Ban Treaty.
Elimintating nuclear weapons altogether though the Nuclear Weapons Ban Treaty (TPNW) is ultimately the only way to ensure that they are never used again. Let’s keep campaigning for it while we continue to campaign for interim measures that will make us safer, and could open up the possibility of the Nuclear Weapons States getting on board with the Ban Treay.
Brian Larkin