Working in Edinburgh and across Scotland since 1980, we promote Our Cooperative Games and Conflict Resolution programme for Primary Schools supports Health & Well-being in the Scottish Curriculum for Excellence and provides a foundation for a culture of peace. The programme .

We’re now developing Restorative Practice course that builds on the foundation. Find out more about the programme here. There are 37 war memorials in Edinburgh.

Isn’t it time peacemakers are recognised in public space too?

As a member of the International Campaign to Abolish Nuclear Weapons (ICAN) we are co-recipients of the Nobel Peace Prize.

Our 140,000 Origami Cranes project,engages people in their communities to remember all those killed by the Hiroshima atom bomb and raise awareness of the Nuclear Weapons Ban Treaty.

As a member of the Don’t Bank on the Bomb Network in Scotland we are working to eliminate nuclear weapons through divestment. We organize events like Fly Kites not Drones and vigils at Armed Forces Day and other events where children are encouraged to play with weapons.

We distribute White Poppies remembering all victims of war.

And we’re working with Campaign Against the Arms Trade to advocate Divestment from arms and to end arms sales to Saudi Arabia. We support refugees directly with periodic clothes and donations collections.

Working through the Arts We organise exhibitions to raise awareness of the impact of war such as one on Syrian childrens’ art work and one on people who oposed the First World War.

We publish briefings and fact sheets
on issues of war, peace, migration and environment.
Our bi-monthly Peace & Justice News features articles, Book Reviews, Centre News, News from around the Movements and more. 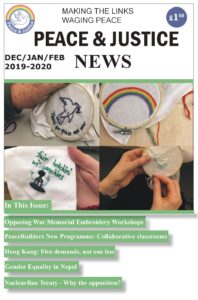 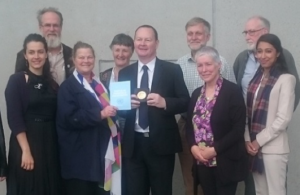