In 2015 P&J volunteer Atsuko Betchaku started this project aiming to make 140,000 origami peace cranes to remember those who were killed by the atomic bombing of Hiroshima and to  express the hope that this will never happen again and highlight the Treaty to Prohibit Nuclear Weapons – the Ban Treaty – as a way to ensure that.

Since then people have been making paper cranes at workshops in Edinburgh, at the P&J Centre, in churches, libraries, at home, even on buses. We’ve received peace cranes from many countries including France, Germany, Canada, New Zealand and Japan. And now we have exceeded our goal! Well done everyone who has contributed.

Now we want to create an Exhibition incorporating these 140,000 peace cranes and artists’ responses to Hiroshima and the bomb. Our Peace Cranes exhibition will be part of the Just Festival at St John’s Church, Edinburgh in August 2021 and will celebrate the ratification, by then, of the Nuclear Weapons Ban Treaty.

Several pre-exhibition events happened August (2020). These are available to watch and are listed below followed by background on the 140,000 Origami Cranes project.

We are honored to have recieved this message from the Mayor of Hiroshima Matsui Kazumi congratulating us upon the launch of these events. The message is introduced and read by Peace Cranes artists Michael Mears and You-Ri Yamanaka.

Michael Mears performance of The Priests Tale Livestreamed from The Sands Theatre in London on 6 August.  This compelling account of a survivor of the first atomic bombing was written and performed live by Michael with live musical accompaniment by violinist Chihiro Ono. The Priest’s Tale is inspired by John Hersey’s book  Hiroshima (1946) and offers an eyewitness account of the first atomic bombing. Meet Father Wilhelm Kleinsorge – a German Jesuit priest living in Hiroshima, who survived the blast but witnessed much of the devastation and later succumbed to radiation sickness. Experience Father Wilhelm’s story full of extraordinary detail and rounded out with warmth and compassion. (Duration approx. 55 mins.) Directorial supervision by Rosamunde Hutt.  Watch anytime here. Michael and You-Ri performed  an excerpt from Michael’s new play The Mistake at the Just Festival on 16 August. The live stage version will appear as part of our  Peace Cranes 2021 exhibition. Working remotely under lockdown the performers Michael Mears and You-Ri Yamanaka, and director Jatinder Verma compiled an exclusive film collage of extracts and images from the making of  The Mistake and did a live post-show Q&A together with the  Peace Cranes exhibition co-curators Iliyana Nedkova and Heather Kiernan. Using testimonies and eye-witness accounts, The Mistake interweaves the stories of survivor, scientist and soldier to create an evoking drama of what happens when scientific discoveries unlock the power of nature. Shigeko Nomura is a young woman living in war-time Hiroshima. Leo Szilard is a Hungarian scientist and ‘father of the atomic bomb’. Paul Tibbets is the American pilot chosen to fly the plane that drops the bomb. At 8.15am on a Monday morning in August, their lives become fatally and forever entangled.

Hear the stories of Sadako Sasaki who inspired people all over the world to make origami cranes for peace and of Atsuko Betchaku who initiated our our Peace Cranes project at 5 minutes 38 seconds into the video. Learn how to make an origami crane with Shoji Masuzawa at 14:03.  There’s a lovely short film (3 mins) about the creation of an art work by US artist Jeff Brown inspired by Sadako at 35:56. Peace Cranes Curator talks some of the artists who will contribute and about our plans for the Peace Cranes exhibition at the Just Festival in 2021 at 38:57.

“I am delighted and honoured to have been appointed the Curator of the Origami Peace Cranes exhibition. With a background in curating contemporary art, film, dance, drama and design with over 25 years of experience, I can’t help but aim to attract Scottish and international artists with socially proactive practice who are passionate about the issues of nuclear disarmenment and environmental breakdown as much as I am – I grew up on the other side of the Iron Curtain and was terrified of the nuclear war waged by the two evil empires of Soviet Union and USA!

We will aim to put all the 140,000 cranes and the efforts of all the incredible volunteers who have contributed so far centre stage in the exhibition and the wide public engagement programme not only as part of the Just Festival but also as part of Edinburgh Art Festival in August 2021. Thereafter, we will try to tour the exhibition to partner museums in London, Zaragoza, Leiden and Hiroshima. I am really looking forward to meeting most of you in these strange times of isolation via Zoom to discuss our exhibition ideas further.” Although we have over already assembled over 140,000 schools and community groups that want to have children make origami cranes and send them in to us can still be included in the exhitition.

(Some extra cranes will be used to display in other places to advertise the main exhibition.) A couple of suggestions for this are:

Children can write their names on the wings –  Write a wish on the other wing – Take group photo with their cranes – Include a note saying number of cranes, name of school and class group and any message they want to send along – Thread the cranes on one long thread with just a small enough gap between them so each crane can be seen and add a tag at the bottom end indicating name of school etc.(This arrangement would be great for the exhibition as we can hang cranes from high up in the roof space.)

Cranes can be posted to: 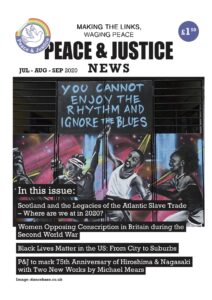